MISHAWAKA — The Lady Knights are on a roll. 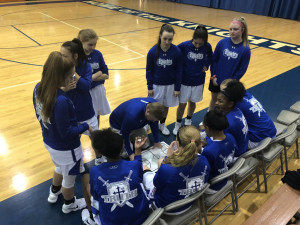 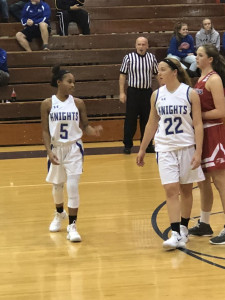 Ever since opening the season with a loss against Fairfield, defense has proven to be a winner for Marian. After holding the Goshen RedHawks to a stalemate in the first minute and a half of the opening quarter, the Knights went on an 11-1 run and built a cushion that would not get too thin, leading to a 50-32 win and the best start in the girl’s basketball program.

Marian (5-1) finished up the non-conference schedule of the 2017 calendar year in a big way. The Lady Knights put on pressure from the tip-off against Goshen (2-2), who was not allowed near the basket in the first 1:34 of the game, forcing first-year coach Shaun Hill to use a timeout. Fifteen seconds after the break, Mikiya Roby forced a turnover leading to the first points of the game. From that first steal, the Knights did not look back.

A run built to a ten point lead, although Goshen wasn’t ready to go away. The RedHawks scored six of the quarter’s last eight points to bring the deficit within seven, including from a big layup by senior Brooke Bechtel. After another great start to the Knights seemingly impenetrable defense, triple baskets by Christina Himelick and Roby turned the lead to 13 for the Lady Knights.

Goshen would go down into the half and came out swinging to start the third quarter. A quick three-pointer by Bechtel brought the game within five, but that did not dim the fire from the Knights offense. Himelick came down and answered with a three of her own, and from there, the Knights would go on a third quarter outburst.

A 19-point lead late in the fourth would lead to the victory for the Knights, and the best start for the program and it’s first-year coach Steve Scott.